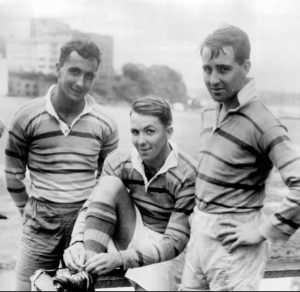 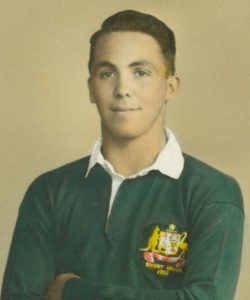 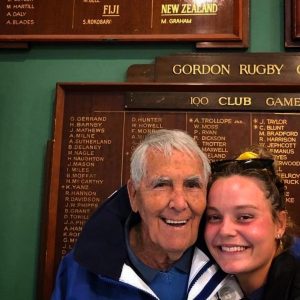 it is with a heavy heart that we announce the passing of a legend of Gordon and NSW Rugby, James “Jim” Phipps.

Jim Phipps was born in 1930 and grew up in Wahroonga, where he attended Barker College. He displayed real talent, playing three years in the 1XV and twice representing CAS. After school, his family moved to Picton, where they had a dairy farm, and he attended Hawkesbury Ag College. During this time Coach, Slab Allen contacted him to ask if he could play for Gordon on the weekend. Jim was honoured and agreed.  He had never played for Gordon, but it wasn’t until he attended training on the Thursday night that he realised he was playing in the 1950 Grand Final against Manly at North Sydney Oval. Trevor Allen gave him strict instructions on what to do and what not to do, but unfortunately, they did not win, but Jim went on to play for Gordon until 1957.

Jim was selected on the Wallaby tour of New Zealand in 1952, but it wasn’t until the tour of South Africa that he played his first test – at Ellis Park, where they drew the series one all. He toured NZ again in 1955 and in 1957 was selected for a nine-month British Isles tour, where, early in the contest, he, unfortunately, broke his leg. Following that bad luck, Jim developed Hepatitis, which ended his rugby career; after 12 tests for Australia and nine years playing for Gordon. He came home to realise he had to get a job, and at the age of 26, Jim moved to Queensland to manage a cattle property but eventually returned to NSW to manage a farm in Rylstone.

I asked Jim who he admired most in his playing days, and he said Trevor Allen and Arthur Summons were ‘pretty special players’, but as a person, he admired Bryan Johnston, who ‘was a gentleman and one hell of a nice bloke.’ His fondest memory was playing in a First Grade match alongside his three brothers – Peter (inside centre), John (on the wing ), Bobby( lock) and of course, Jim played outside the centre. Another great memory was scoring five tries for NSW against Qld, which was a record at the time, and I would not be surprised if it still is!

Jim regretted being unable to spend more time mixing with the players and attending the dances and social engagements with them.  He said he loved Gordon and the people, but Jim, with his wife, Gillian, drove down to the game from Picton, after working the farm, played the game, got straight back in the car to return home and wake at 3 am to milk the cows. However, he regularly thinks about and follows Gordon – and he’s so proud of his association with The Highlanders.

Jim Phipps – Gone but not forgotten.